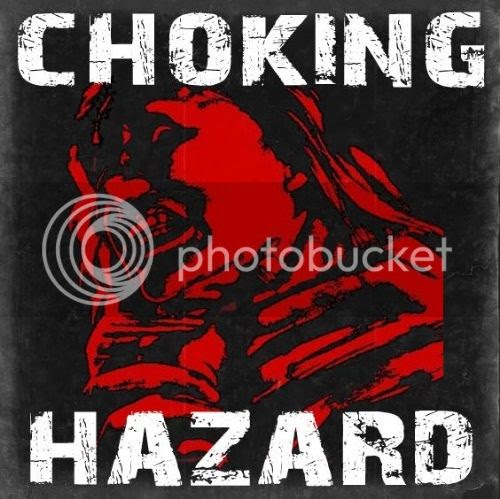 Choking Hazard records is a label from Montreal (Québec, Canada) who started at the end of 2006. Mainly into Sludge, Doom, Power Violence & Grind.
You can visit my Facebook page and for any orders, questions or comments, you can write me at chokinghazardrec@hotmail.com
********
NEWS
********
...coming soon! 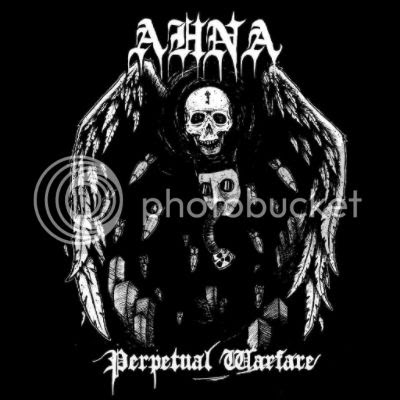 This 12'' is for sure their best recording!! it's totaly grimmy, evil and totaly old school death metal!!! Just imagine Hellhammer, Autopsy, Incantation and Portal mixed together!!! 5 songs EP + bonus track / In Deaths Grip / demo song for upcoming Ahna LP which is gonna be titled Crimson Dawn All records are pressed on white with black splatter vinyl and are coming inside BW printed inner sleeve inside BW pocket sleeve (3mm spine). Shrinkwrapped. Pressing of 666 copies 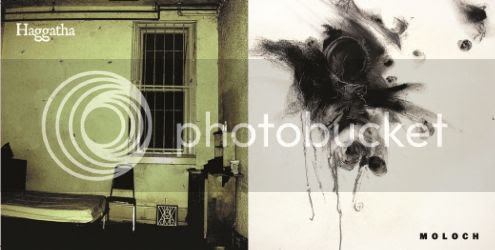 HAGGATHA & MOLOCH are 2 of my favorite sludge bands right now!! it's why i thought about this split!! Lucky you!! they accepted!! I'm co-releasing it with Graanrepubliek records and Dry Cough records from Europe!! HAGGATHA (Canada) & MOLOCH (Uk) are not at their first release and you can guess it when you listen this split!! 2 heavy and sludgy songs!! it's not the kind of split that you get for 1 side!! 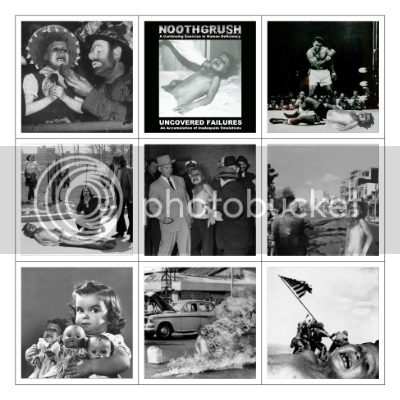 Do i really have to mention who are NOOTHGRUSH? I guess not!! This lp will be an album of covers from out of print releases, unreleased recordings and a brand new one with the new singer (Dino from DYSTOPIA). From Duran Duran to Crossed Out, this LP will be an interesting release. The tracks listing and the whole artwork will stay a surprise until you get your copie in your hands! it would be a 500 made with 100 colored vinyls. 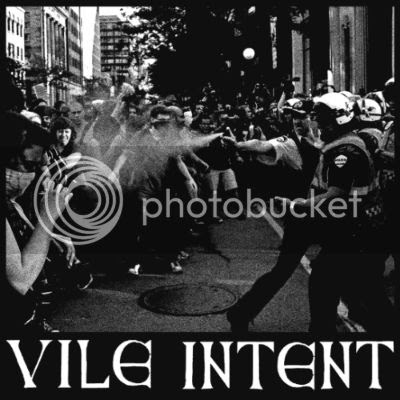 Here's the third 7" of this amazing power violence band from Montréal!! Still in the same vein of their first 2 eps, they're fast and Noisy with some really slow part!! This band is 100% old school!! the black & white artworks, the recording and the lyrics!! For Fans of CROSSED OUT! This is a 600 made! NO REPRESS! GET IT FAST! Co-released with diseased audio records!! 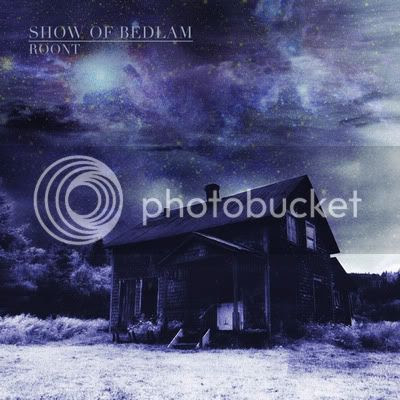 3 years after their split CD with Jucifer, this is their first full lenght album! Since they have a new bassist who also played in Boneblack and still playing into Xothogua & War Measure, Show of bedlam are really heavier! They have a lot of interesting and different influences like Neurosis, Electric Wizard, The Swans, UFOMammut, Babes in Toyland & Sonic Youth. with all their influences and their interest for the mental disorders, they make some really sludgy and creepy songs! This LP will make you feel bad in a good way! 500 made with 100 on colored wax!! 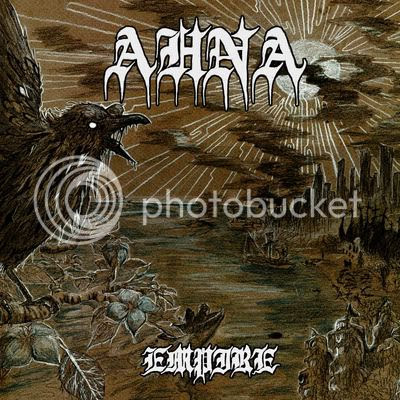 This release is the hell on wax!! It's so brutal and primitive!! the most pure and honnest anger!! Really influenced by Hellhammer, Autopsy & Dark Throne, they're a mix of sludge and grind! they really have their own style! they called their music "Droneviolence" and it's the best way to definite their sound! 500 made with 100 on colored wax!
http://ahna.bandcamp.com/album/empire-2 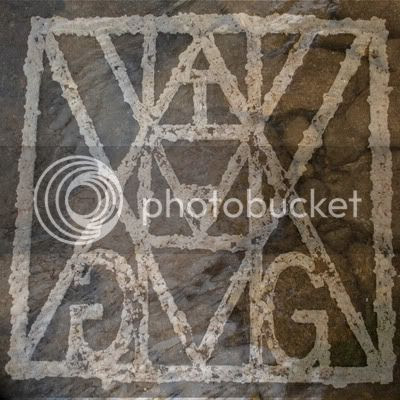 Here's the fourth release of HAGGATHA!! they're better than better! Sooooo loud!! The sound is awesome! Haggatha-II & Haggatha-III was very different! II was more slow, in the veins of THOU and III was more into the EHG vibes! IV is the perfect mix of both, very slow with some killer riffs!! I'm really proud to release this masterpiece of sludge with Blind Date records from Germany! It's a gatefold lp with a limited edition of 200 colored vinyl and 400 on black wax!

500 copies / 100 on red & 400 on black / co-released by Choking Hazard & Doomsday Machine records / Originaly released by E.N.D. records in 2001, Only 300 copies, ultra rare release from theses Grindcore bands from Québec. Dahmer & Mesrine are 2 oldsters of the Grindcore scene of quebec. really fast and brutal!! 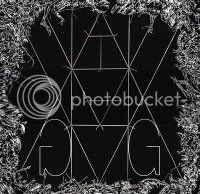 The third release of this awesome sludge band from Vancouver is a 2 songs 7". It's in the same vein of the second LP, same members & same studio! The sound is really heavy! Both songs are shorter, faster & more catchy! It's a 500 made, 100 clear & black vinyls with a different cover with silver ink will be available from Haggatha & Choking Hazard. the normal version will be 400 black vinyls with black/white artwork! 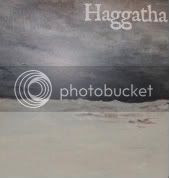 This is the second album of the awesome sludge band from Vancouver called HAGGATHA. they self released 300 copies for their fall 2010 Canadian tour and I repressed 250 copies!! Featuring members of Osk & Goatsblood, Haggatha is in the same veins then MOLOCH & THOU. 7 killer sludge songs!! 100 180gr. color vinyls only available from Choking Hazard records & Haggatha + 150 black vinyls.

Vile Intent is a power violence band from Montréal. I'm really proud to release their upcoming 7 songs 7". 7 songs of slow riffs, blast beats and feedbacks!!! Expect something in the vein of CROSSED OUT & FORCED EXPRESSION. This 7" could have been Slap a ham 14!!! For fans of ENDLESS BLOCKADE, HATRED SURGE & IRON LUNG! 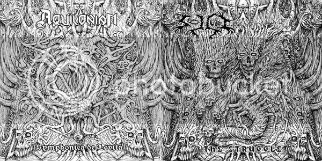 The first song of 35 minutes is from AQUILONIAN, the new band of Michael Makela (guitar/vox) and Michael Henry (drums/vox) from BONGZILLA!! We can't remove the 70' influences and the stoners vibes from the guys of Bongzilla and we know it. You can expect something in the vein of SLEEP's Jerusalem. The second part of the cd is another song of 35 minutes by SOLLUBI. This song is heavy, noisy and mean!! They sounds more angry than the first album. Jesse (Rape X) bring all the violence and hate of Rollins with his vocal. At the beginning of this cd, you will be stone on your couch with an overdose of THC but you will probably knock the first person who talk to you at the end!! 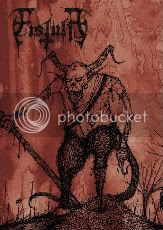 On this recording, Corey Bing played guitar, did the vokills and got Bahb Branca on bass, Nate Linehan on drums and Scott Stearns for additional guitars. Fistula's fans are always surprised when they release something because they can't expect nothing from theses guys except something heavy and dirty but it's always different. For this new release, the old school metal influences like Celtic Frost, Hellhammer and Autopsy are really interesting and new from theses guys. It's Brutal, full of hate and old school for sure! It's a limited edition of 500 on Dvd cases. First 200 come with stickers and pins and first 100 with a poster (12" X 18" + pins/stickers). 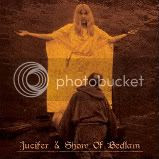 The JUCIFER's songs on this split are probably the heaviest stuff from this amazing duo. The 4 songs are really different but very heavy, forget the nice voice of the cute girl on the other albums, you'll only find a demented and crazy girl who scream all the way!! This D.I.Y. recording sound will remind you JUCIFER live. SHOW OF BEDLAM from Montréal are also a band led by a demented girl. Can you imagine SAINT-VITUS mixed with BABES IN TOYLAND? S.O.B. are a heavier version of this crazy proposition. That's the new band from the guys of SEIZED and TOWARD DARKNESS. For fans of MADE OUT OF BABIES and BATTLE OF MICE. 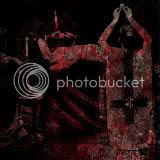 The Cd start with 2 new songs of the Montréal's minimalist noisy doom called GHÄST. After that, ABANDONER continue with 2 noisy and ambient songs. It's a side project from the guys of UNEARTHLY TRANCE. You can expect a really dark, grimy and noisy release!!! 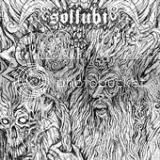 SOLLUBI are a side project from the guys of FISTULA and RAPE X. They play a very original kind of psychadelic / sludge. You can find the down tempo and the heavy sound of FISTULA with a psychadelic and noisy vibe made by RAPE X. They sounds like a tribute band of HAWKWIND made by -(16)-. 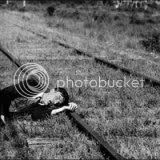 The is the Cd version of the Moloch 10" on Feast of tentacles / Shifty records. Awesome UK sludge for fans of Iron Monkey, EHG, Cavity, Grief & Noothgrush. 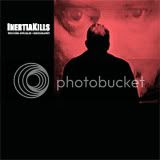 INERTIAKILLS was a grindcore band from QUEBEC formed from members of HUMAN GREED, SHITFIT, SEIZED, IMMORAL SQUAD. They had a really short existence of 6 months in 1995. They released a 7" called "Trop tard", a split 7" with SEIZED and they appeared on some compilations. It's fast, dirty and primitive. Fans of old school grindcore like NAPALM DEATH and ASSUCK will enjoy it. 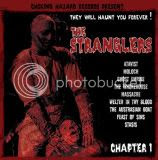 2 Cds... 8 bands... 2 hours and a half of doom & sludge. It's a concept about strangling scenes from old horror movies, I got this idea with the name of my label, Choking Hazard, it's not about the band called the Stranglers! Doom and Sludge bands transmit the same feelings than old horror movies, it's creepy & primitive with slow motions. 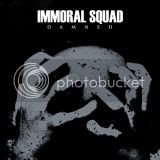 Some oldsters from Québec are making a return. Immoral Squad (1989-1994) prepared a new album of New York style hardcore mixed with thrash, and since they started that long ago, there’s no need to tell you that they get their inspiration from the old classics. Expect DRI, Agnostic Front and Nuclear Assault mixed together. Featuring members of Fistfuck, Dahmer and Inertiakills. 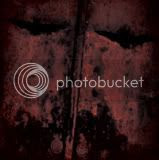 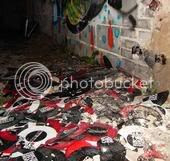 Banned from Choking Hazard records. I got too much problems with this bands, too much lies, too much bad attitudes & too much lack of respect. I destroyed 600 copies of 1000. 200 went to the band, 200 got distributed in some distros. Japanese Hardcore!

Featuring members of Florida oldsters like Pink Lincolns and Hated Youth! Ultra snotty basic, jumpy, Ritalin-laced pure punk rock American style. Sounds like any number of obscure, zit faced youth punk / hardcore bands circa 1981. The lyrics are simple and straightforward and at the same time, clever and amusing. Fans of THE AUTHORITIES and ANGRY SAMOANS will enjoy it!

Antibodies are a three piece Punk band based in the London/Essex area of the UK. Often compared to Crass mixed with Sex Pistols, Antibodies are angry, sarcastic, twisted black humour and outspoken. Over the years they have supported John Cooper Clarke, Subhumans, Vibrators, Total Chaos, Anti Nowhere League and many other bands.

Promote Your Page Too